In comparison to its international peers, the German Green Party (called Alliance 90/The Greens) is considered to be influential. The party does not only have a strong record of electoral success and leaving its governance foot mark with signature policies like Germany’s nuclear phaseout. The Greens currently co-govern in 11 out of Germany’s 16 states. In my home state of Baden-Württemberg they are even the strongest party in parliament and lead the coalition. So what makes Germany’s Greens comparably successful?

The reasons are manifold, as I suggested recently in a workshop at the Global Greens Conference in Liverpool (video) where I presented my latest study Greens in Government. Among other reasons they include Germany’s parliamentary system, keeping the environment at the heart of their party platform and the Greens’ growing professionalization over the last 20 years. Greens from all around the world attended the workshop. They could relate to most of the arguments. However, one idea struck out to most of them: the German Greens’ ability to form coalitions with a variety of other parties. 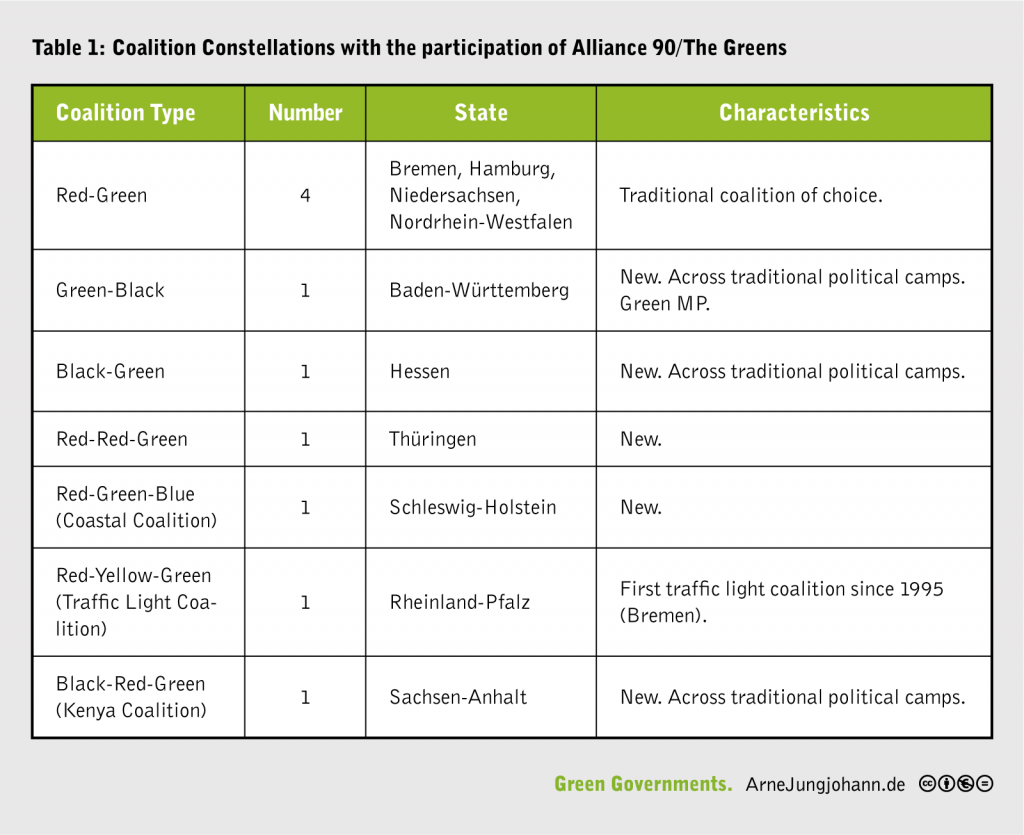 Table taken from Greens in Government.

Currently, the Greens are governing in seven varying constellations: In four states they govern with the Social Democrats in a classic red-green coalition, the former (center-left) coalition of choice of both parties. In two cases, however, the Greens entered a coalition with the conservative party CDU, crossing traditional political camps. And in four other cases, the Greens have formed coalitions with two other parties.

This multitude of coalition constellations beyond classic political camps reflects the independence that the Green Party and its state associations have been exercising for a long time. With forming both center-right coalitions (such as black-green in Hessen in January 2014) and center-left coalitions (such as red-red-green in Thüringen in December 2014) the party fulfils its claim to independence by implementing its policies in diverse coalition constellations. Entering these coalitions also stopped the internal party feuding between the various wings about the right sort of coalition is largely ended for the time being.

However, the coalition diversity might also pose challenges since the aims as well as the understanding of the role of Green state chapters can some-times greatly differ from each other.  The differences then become apparent primarily when the interests of the state associations need to be amalgamated for the party, for instance in the case of coordination for the Bundesrat or for national election campaigns. Still, the German Greens show what I find a remarkable strategic flexibility in forming coalitions with different parties. They are extending their scope for action also with a view to the federal election in 2017.

Finally, keep in mind that the Greens’ coalition flexibility didn’t come overnight. It is the long-term result of governing experience, inner-party power struggles, and broader political circumstances, such as the willingness of other parties to enter new coalitions. This figure (created by Mar Saxer) gives you an idea what I mean. While not agreeing on all details I find it really helpful as it visualizes strategy debates within German parties. 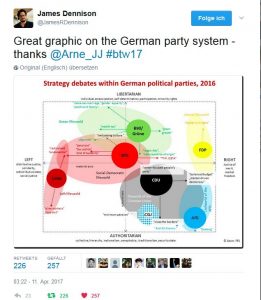 This Tweet by James Dennison is going wild. Check out his new book on the Greens in British Politics.