In mid-May I toured eastern Canada to talk about how citizens pushed for Germany’s transition to renewables.

The tour started in Halifax (Nova Scotia) and took me to Montréal, Ottawa, Waterloo and Toronto with meetings and briefings at the Goethe Institute, the National Observer and science centers like CIGI.

The message I brought was that, from the German experience, energy democracy is the fast track to decarbonization. Those worried about our ability as the human race to cut emissions fast enough – and there are good reasons to be very worried – should embrace citizen power. Leaving the transition up to utilities who want to protect their current assets will be much slower. For them each kWh from renewables undermines their profits from conventional power plants. But energy democracy will accelerate the transition. 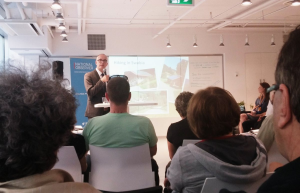 Click here for an article or a video about the event in Ottawa. Photo credit: private.

These kind of tours provide a learning experience for both audiences and speakers. Over the course of events and Q&A sessions, I realized more and more how political conditions and energy markets in Canadian provinces differ from those in Germany. In fact, touring Canada and presenting the German story revealed to me which factors had provided favorable conditions for the Energiewende. Two observations struck me most.

First, many Canadian provinces have regulated electricity markets. Public and municipal utilities provide electricity for cities or whole regions, usually without competition. If you live in a city, you buy the power from your local utility. Not in Germany. The Germans liberalized their power markets in the late 1990s. Households can choose among hundreds of firms to buy electricity from. This open market, in combination with feed-in tariffs, allows for new investors to come in and build new power plants, including citizen groups to invest in wind farms and community solar.

Second, Canadian provinces have little coal in their power mix compared to Germany. Take Ontario, which is the first jurisdiction in North America to get out of coal, thanks to an amazing campaign which is summarized here. With lots of hydro and nuclear, their power mix is already low-carbon. In Germany, more renewables would drive coal out of the market. When most electricity already comes from low-carbon sources, however, there is little climate benefit from a switch to renewables. That takes away a strong argument for energy community advocates in Canada to make their case. Coal’s continuing strong role in Germany’s power mix and the liberalized power market both helped Energiewende campaigners to push for more renewables. In the process, the market opened for the new investors who built those wind farms, solar parks and biogas plants that the incumbents had no interest in.

A final thanks to all the helping hands of people at the organizations hosting me on the tour: the Goethe Institute, the Ontario Solar Energy Association and others: vielen Dank! In particular, the clean tech company Senvion chipped in some funding for the tour expenses. Finally, the tour would not have been possible without the German Embassy in Ottawa, to which I am grateful for the generous support, in particular Mr. Christoph Hebermehl for organizing such a rich program. It is activities like these that brings people together to share ideas about how to promote the public interest and democratic values.

Some personal highlights from the tour

A #selfieForEnergyDemocracy contest at my events to win a signed copy of the book.

This summary of my talk by the National Observer:

Talking about ways to learn from energy democracy in Germany and apply it in Ontario with @Arne_JJ. pic.twitter.com/Ufb3W4eOoy