Last week I took the Energiewende on the road along the US East Coast. Over there the Energiewende gets a lot of attention. The assumption is: If an industrial powerhouse like Germany can power its factories, heat its homes and run its trains on renewables, then basically any country can.

This only tells half of the story, though. Apart from a transition from dirty to clean technologies the Energiewende is also a story of a political transition: from a centralized, corporate dominated to a smaller, more distributed and decentralized energy system. What makes the Energiewende unique is that citizens, not big utilities, are driving this transition. It is the reason why Germany may be the only country in the world where the switch to renewables is a switch to energy democracy, as we show in our book Energy Democracy. 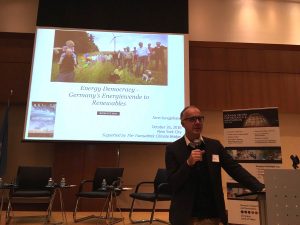 That was the message I brought to meetings, lectures and panel discussions. Since I currently live near the Black Forrest and have shared a story on the Power Rebels of Schönau, I had to include a picture of the cake in my presentation (pdf). My tour started in Chapel Hill at the University of North Carolina, took me to Washington, DC with meetings and briefings at the Goethe Institute, the Heinrich Boell Foundation, the Transatlantic Climate Breakfast Club, the US Senate, the World Bank, and last but not least the local chapter of the German Green Party (which I’d help to found eight years ago). On my way to Big Apple I met up with researchers at the Science & Global Security Seminar Series at Princeton University. In New York City the German Consulate hosted a panel discussion with me, as did the Consulate in Boston. Finally I was giving a talk at the MIT’s Center for Global Change Science.

Overall the tour went well and was lots of fun. Folks were curious about what’s going on in Germany, some more skeptical than others. Many were interested in how this could be applied to the United States where a transition to renewables is underway, but mostly driven by corporations.

When I talk about the Energiewende abroad I often get asked so what are your lessons for other countries? The question is simple, but the answer tricky. No country is the same. What works in one might be a dead end in another. And yet, the German case offers some pointers for others. I have found five features of the Energiewende to be most striking, such as that there is no silver bullet in terms of policymaking. Or that the Energiewende is an economic showcase: Going renewables pays off. Also, there was no need to wait for breakthroughs; deployment and cutting red tape is what drives down costs. In addition, without building a powerful narrative and strong alliances we would have never gotten where we are today. 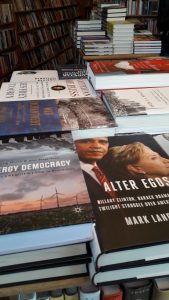 And finally, the most relevant take away from the Energiewende is this: The energy transition represents a one-time window of opportunity to democratize the energy sector. The world already is going renewables, a global transition is underway. The thing is: Without rules that allow citizens to take part in, corporations will handle the transition for us and without us. In representing the interests of their shareholders, they view people as consumers, not as citizens. They have conventional assets to protect. So a corporate-driven transition is not only less democratic, but also slower when excluding citizens. Those who are worried about climate change and our ability as a human race to cut emissions fast, should embrace energy democracy. It’s the fast track to decarbonization.

A final thanks to all the helping hands of people at the organizations hosting me on the tour, vielen Dank. I am also grateful for the German Embassy in Washington DC generously supporting my tour under its Transatlantic Climate Bridge, a program which fosters transatlantic cooperation on climate change and energy policies. It is often programs like these, mostly funded by governments and foundations, which allow organizing dialogues and bringing people together to foster best ideas to promote the public interest and democratic values.

One thought on “Energiewende goes USA”