Repeatedly, critics of Germany’s energy transition say that France’s is a better model to follow. A closer look, however, reveals an impressive amount of overlapping. Contrary to the conventional wisdom even of many energy experts, France and Germany are pursuing a similar energy path.

Last August, the Wall Street Journal called the Energiewende Germany’s “lonely revolution.” And in January, Deutsche Welle claimed that “Germany stands pretty much alone in its green energy policy – both in Europe and globally.” Often, France is portrayed as a better example to follow. The comparison of Germany and France generally runs along two lines. First, German per capita carbon emissions are roughly 50 percent higher than in France. And second, France was able to roll out nuclear much faster than Germany has ramped up renewables. Let’s start with a chart from the International Energy Agency. 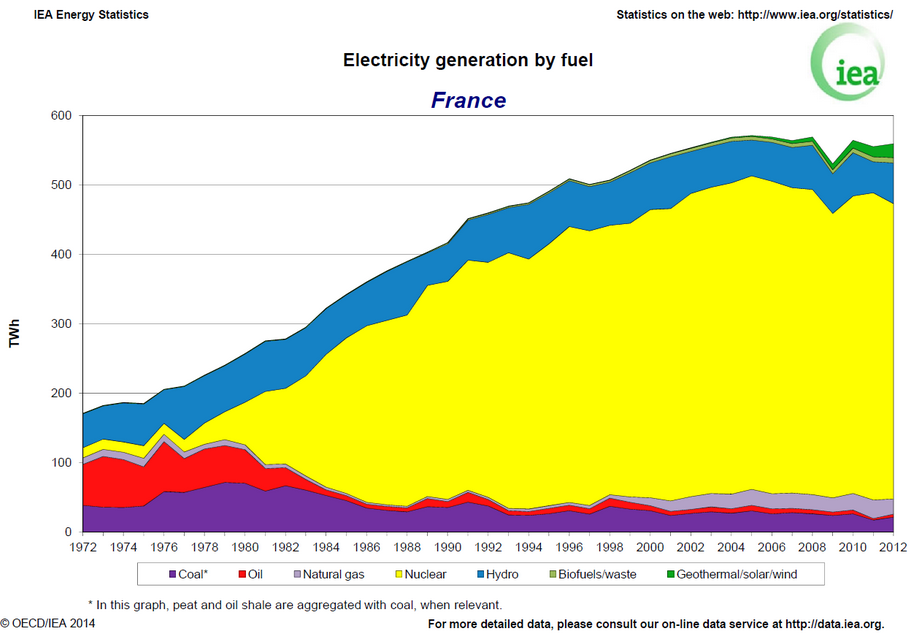 The French get roughly three quarters of their electricity from nuclear, and they went from a very small share to around 75 percent in around 2 decades starting at a low level in 1977. In comparison, it took Germany around 15 years to increase the share of renewables by 20 percentage points starting in the late 1990s, as the chart below shows. 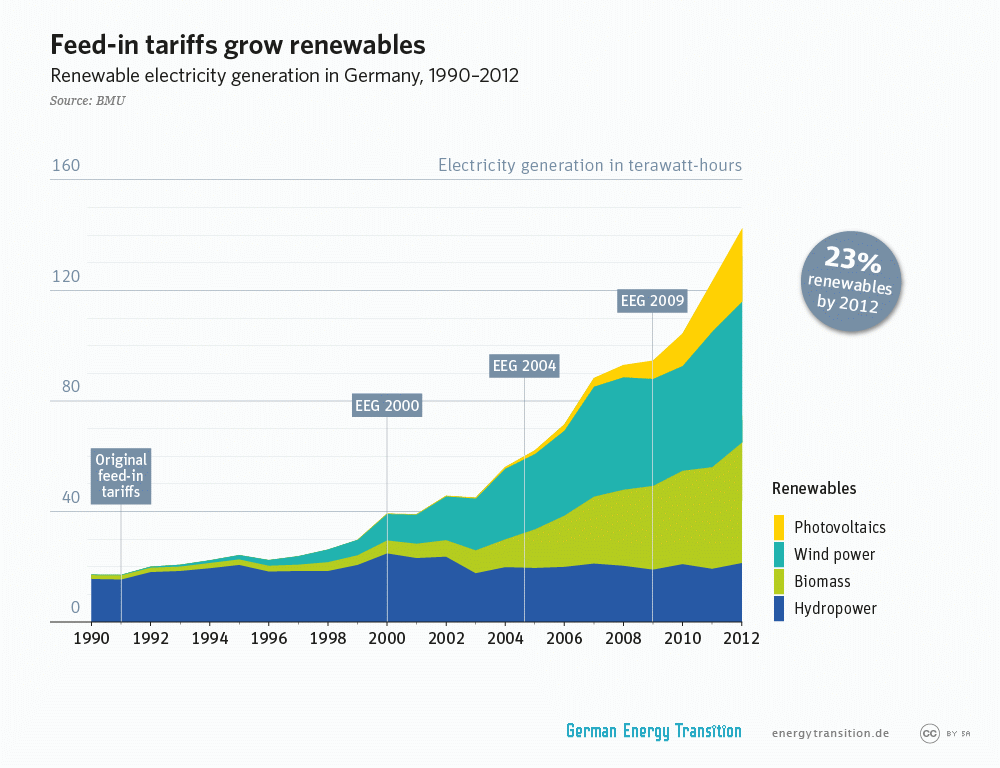 Clearly, France managed to ramp up nuclear much faster than Germany increased renewable electricity. But apparently, if we follow the French example, it leads back to something surprisingly similar to the Energiewende. Contrary to the conventional wisdom even of many energy experts, France and Germany are pursuing a similar energy path. A recent policy analysis for Germany’s Friedrich Ebert Foundation (PDF in German) finds that the strategic goals of the two countries are generally convergent by midcentury:

France has a slightly lower GHG target because its current starting point (8.3 t CO2e per capita per year) is well below Germany’s (11t). While France starts with less ambition with renewables in its electricity sector, the overall renewables target in total energy consumption is more ambitious than Germany’s. On energy efficiency, both the long-term and short-term goals are very similar.

Even plans for nuclear have an astonishing amount of overlapping. Germany aims to reduce the share of nuclear power from a peak of around 28 percent to zero percent by 2022. France aims to reduce the share of nuclear by 25 percent (from 75 to 50 percent) by 2025. In the process, German will close 17 nuclear plants; France, an estimated 22. So apparently, decades of reliance on nuclear leads to a transition to greater efficiency and renewables, at least in the case of France and Germany.

Despite similarities in these goals, France’s approach is considered very different from Germany when it comes to the role of citizens and the public. Pierre Cannet of WWF France says: “democratization or other ways to involve the public in the [French] energy transition is yet to be built”. Others, such as French sociologist and nuclear critic Sezin Topçu, believe that secrecy is the main explanation for the success of nuclear in France, while Germany has produced an admirable level of transparency on the issue (video in French). In our next post, we investigate the unknown history of nuclear in France.

Craig Morris (@PPchef) is the lead author of German Energy Transition. He directs Petite Planète and writes every workday for Renewables International.

Arne Jungjohann is a political scientist, Twitterbrainer and energy expert with a focus on the Energiewende, its politics and communications.

French nuclear power history – the unknown story
Do parties matter? The German Greens and their impact on the Energiewende

One thought on “The French energy transition and the Energiewende”