Energy experts often argue about the best path forward, transitioning to a truly sustainable economy.  Many see Germany with its Energiewende leading this transition. But, assuming the observation is correct, why so? Why is Germany moving faster than, let’s say, the United States? One of the factors which is often mentioned is the political system. Do parties matter? is an old, but nevertheless highly current question of political scientists around the world. So what was, and is the role of the German Green Party in the Energiewende?

Thanks to Manuela Achilles and Dana Elzey from the University of Virginia, I was challenged to answer the question. They published a book called Environmental Sustainability in Transatlantic Perspective (which I highly recommend). I wrote about The German Green Party: From a Broad Social Movement to a Volkspartei (sneak peak here). The article is one out of a dozen which lay out the technical, environmental, and political issues relating to the various proposals to tackle climate change. The unique approach of the book is the transatlantic character which is reflected by its topics, but also its authors from both sides of the Atlantic. Contributors include  MIT’s Michael Mehling, climate diplomat Georg Maue who is a driving force behind the Transatlantic Climate Bridge and Dale Medearis, a senior environmental planner with more than 20 years of experience in transatlantic policy exchanges. I like the book, because its multi-disciplinary perspectives offer a view on the experiences behind and the challenges ahead. If you are interested in insights on environmental governance, energy security, technological innovation, urban design, and avenues for transatlantic partnership – this is your book.

Back to my original question. There are multiple reasons why the Energiewende emerged the way it did in Germany. The country’s federalism and its multi-party system is a key, though by far not the only factor. The German Greens – called Alliance 90/The Greens in full name – surely have played their role. They have come a long way from an oppositional and heterogeneous social movement to a broadly based people’s party. Their capability and willingness to form effective governments with different political partners, at both the state and federal level, have strengthened their position and allowed them to influence the country’s agenda. As of February 2015, the Greens are governing 8 of 16 Länder in various coalition governments across Germany (with the city state of Hamburg likely to become the 9th). 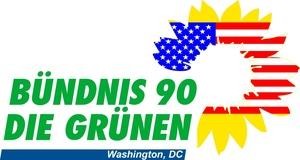 Credit: Logo of OV Washington, the local chapter of the German Green Party in Washington DC.

In my view, the Energiewende can be considered as a strong indicator for the Greens’ success. Would the Energiewende have started without the Greens? Absolutely, no question. Would it have become so robust and powerful without the Greens? No, for sure not. Today the shift from nuclear power and conventional fuels to renewables is supported by all major parties in Germany. They differ on details and ambition, but not on the general goals. The Energiewende has mainstreamed. But it was the Green Party which, when governing for the first time in a national coalition from 1998 to 2005, implemented the initial nuclear phaseout, a comprehensive ecological tax reform, and Germany’s world class renewable energy act (more about these Energiewende cornerstones can be found in my chapter). Without these policies, Germany would not be where it is today in terms of its energy supply. And without the Green Party driving the Energiewende from state capitols across Germany – from Kiel up at the Baltic Sea down to Stuttgart where the Greens lead the coalition – the transition to renewables would be less ambitious and less comprehensive.

The Greens have been a driving force of the Energiewende. Yet, the success in mainstreaming these topics brings about new challenges for the party. Particularly, in light of the Green’s setback in the 2013 federal elections – which had them take a seat on the opposition ranks after an unfortunate campaign – the question arises how the party has to transform itself to continue shaping politics in Germany.

So do parties matter? Likely not as much as the parties themselves would like to believe. But looking at the German Green Party driving the Energiewende, I definitely think so.

The French energy transition and the Energiewende
Report: The German Coal Conundrum